Every seat was filled in the Lincoln Center in Fort Collins, Colorado, as students arrived for the opening ceremony of the 43rd National Collegiate Landscape Competition (NCLC).

As waves of schools filed into their seats, cheers of school pride erupted from various corners of the space. In attendance this year were 844 students from 64 schools.

Jenn Myers, director of workforce development for the National Association of Landscape Professionals (NALP), got things underway, reminding the students that there are so many people here to support them in their careers.

She encouraged them to come by NALP’s booth to learn more about the association and how they can aid landscape professionals through every step of their career. It was a full house at the opening ceremony.
Photo: Jill Odom

Next, deputy director of the Colorado Agricultural Experiment Station and associate dean for extension in the college of agricultural science, Gene Kelly, welcomed the students to Colorado State University.

“You have a lot of opportunities to gain new skills,” he says.

He challenged the students to be mindful about the environment as they move into landscaping jobs and to educate their future clients.

Andrew Ziehler, president-elect on NALP’s board of directors and owner of Ziehler Lawn and Tree Care, spoke next.

“I love the energy at this event,” he says. “It reminds me of a Saturday college game day.”

He says that if there were three things he would tell his younger, college-aged self, it would be the following three things. He says that giving to others will pay you back tenfold.

“This industry was built on sharing,” Ziehler says.

He also encourages landscape students to get involved in what they are passionate about and that the power of building peer networks will help grow you.

Zieheler thanks the many sponsors that make NCLC possible, including Caterpillar, Gravely, Husqvarna, John Deere and platinum sponsor Stihl.

He presented a plaque to the corporate communications manager for Stihl, Roger Phelps, as a show of the organization’s appreciation.

The Young Entrepreneur Award was given to Casey Hurd, owner of Greenscapes, based in Still Pond, Maryland. Hurd graduated from Virginia Tech in 2008, and in 2010 he started his lawn and landscape company that serves both residential and commercial clients.

He thanked NALP and encouraged students to find what they enjoy doing and go after it.

A new element of the opening ceremony was the announcement of the winners of the #WhyILandscape video contest. Individuals and schools were encouraged to create videos explaining why landscaping is so important.

The individual winner of the contest was Elaina Blankenhagen from the College of DuPage and North Dakota State University Horticulture & Forestry Club.

Chairman of NCLC, Doug Halsey with Ruppert Landscape, took over the next section of the ceremony. Brigham Young University brought out the trophy having been the 2018 champs.
Photo: Jill Odom

After Brigham Young University brought out the trophy with much fanfare, dressing the trophy in a tux and playing Queen’s “Somebody To Love,” it was finally time for crowd’s favorite part of the ceremony: roll call.

Representatives from John Deere judged who had the best cheer and would receive the $1,000 prize. The only rules were to keep the chants to 20 seconds in length, and for there to be no projectiles or gymnastics. Keeping with the March Madness theme, they decided to select a final four out of the 64 colleges competing.

There were the typical short and sweet chants like those from County College of Morris and then others went all out with full blown songs and raps, and some even tried to pay tribute to John Deere with references in their chants.

Joseph Mills from Virginia Tech tried to bring home the win like last year with another rap, but this time Deere decided to hold strictly to its 20-second time limit, something that they had been more lenient with in the past.

“One of John Deere’s core values is integrity,” Ken Taylor, corporate sales manager for Deere, says. “We had the rule of 20 seconds, so we have to uphold that.”

Auburn stuck with its solid War Eagle chant while Kansas State sang about working on the jobsite to the tune of “I’ve Been Working on the Railroad.” North Dakota State broke down the elements of landscaping with Fort Minor’s “Remember The Name.” Yet it was Sandhills Community College, that included a guitarist in their rendition of “On The Road Again,” that got the roar of applause needed to win.

“We were thoroughly impressed by the excitement from Sandhills Community College, and are pleased to award them a cash prize that can be used to support their landscape and horticulture programs,” Taylor says.

Check out Total Landscape Care’s Instagram to see the final four’s chants for yourself. 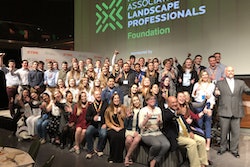 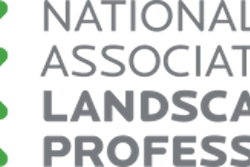 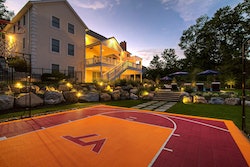 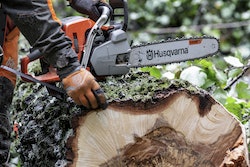