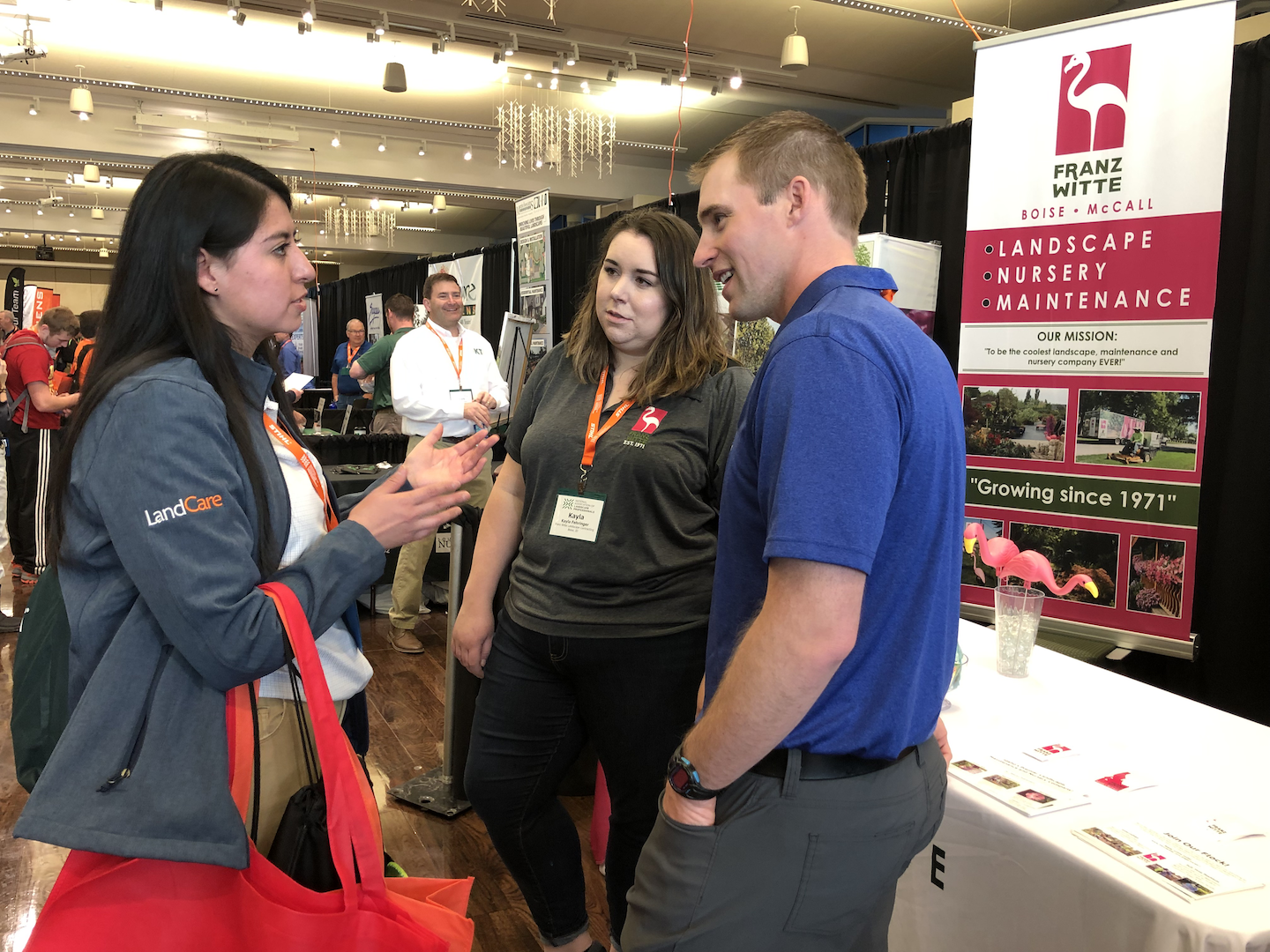 One part of the National Collegiate Landscape Competition (NCLC) that has the greatest amount of mingling between students, faculty, sponsors and landscaping companies is the career fair, and this year’s event held at the Lory Student Center on Thursday, March 21, at Colorado State University’s campus was no different with landscape professionals looking for new hires.

This particular career fair not only had one overflow section for exhibitors’ booths, but two. A total of 96 companies were present at this year’s career fair, including equipment brands like Toro, Husqvarna, Kawasaki and John Deere, along with numerous landscaping businesses from across the country.

Some companies that have consistently had a booth at NCLC’s career fairs in the past weren’t even able to book a space, as they were all sold out. Yet none of this deterred landscaping companies from eagerly meeting with students to see if they were a good fit for their company.

Andrew Key, president of Emerald Isle Landscaping based in Centennial, Colorado, says that the industry could grow considerably more if companies had the labor they needed. He says his company is looking for people who want to be part of the industry.

For a number of landscaping businesses, it was their first or second NCLC career fair to ever attend. One of the true newbies was The Greathouse Company, based in Nashville, Tennessee.

Nick Cooper, business development manager for Greathouse, says they came to the career fair due to their limited number of potential employees in their local area. At NCLC, he says it’s “like shooting fish in a barrel.”

They are currently looking for individuals to fill middle management positions and coming to NCLC’s career fair signals that they are running with the big dogs now. Companies like The Greenery, Inc. exhibit at the career fair consistently to network with students.
Photo: Jill Odom

Despite the large investment required for landscapers to exhibit, including booth fees, travel and hotel expenses, Cooper says he would absolutely come back again because the value is there, and they are planting seeds.

Erin Barr with Munie Greencare Professionals based in Caseyville, Illinois, agrees with this sentiment.

“As long as we’re getting to talk to a steady amount of students and they’re interested in learning about us, it’s completely worth our investment,” she says. “It’s one of those things where I think if a company just attends for one year and never again, it is not going to be worth their time. It is a multi-year investment. You have to come back over and over to get in front of the students, so they start to recognize your brand and know your company.”

Munie is looking for students who are interested in internships and full-time employment opportunities. While many don’t want to move away from home, there are some who see it as a benefit. Barr says they tend to use their different business locations as a selling point to students.

“We do have these other locations, so if they want to move or get a certain type of experience, they can go somewhere for a year and then maybe move on to different location or get back closer to home if that’s their goal,” she says.

The selling point that Rossen Landscape, based in Sterling, Virginia, tries to drive home to students is their young and vibrant company culture. Jeffrey Rossen, owner of the company, says they are currently laying the groundwork in getting their name out there.

“We’re looking for everything,” he says. “We need interns, sales people and people to work in the field.”

Some of the other roles that companies say they are looking to fill include project managers, site superintendents, designers and interns.

While Sam Hill Tree Care, based in Dallas, Texas, needs workers just like everyone else, Hill says they are taking care to find the right people who have the necessary training so they can further develop them into roles such as arborist apprentices.

And students, indeed, used the career fair to search for potential employers. Many were dressed for interviews and had copies of their resume on hand.

“I love the career fair because it brings everyone from across the country, so you get opportunities at this career fair that you wouldn’t otherwise have the opportunity to even consider,” says Cait Carlson with Kansas State University.

Both Carlson and her classmate, Tyler Clements, were looking for jobs at the career fair.

Even for students not actively looking for an internship or job, the career fair still has value.

“I like the career fair a lot,” says Alyssa Brown with Brigham Young University. “I think it’s so valuable to network and I feel like as far as industries go, the green industry is so willing to share. People want to be successful and they want to progress, but they also want you to be successful and so they’re willing to help you. Honestly, it’s the definition of networking.”

The expansion of the 2021 Exmark zero-turn riding mower with a new Radius E-Series machine featuring a twin-blade 48-inch UltraCut Series 3 cutting deck is expected to improve the quality of the work performed by landscape contractors.