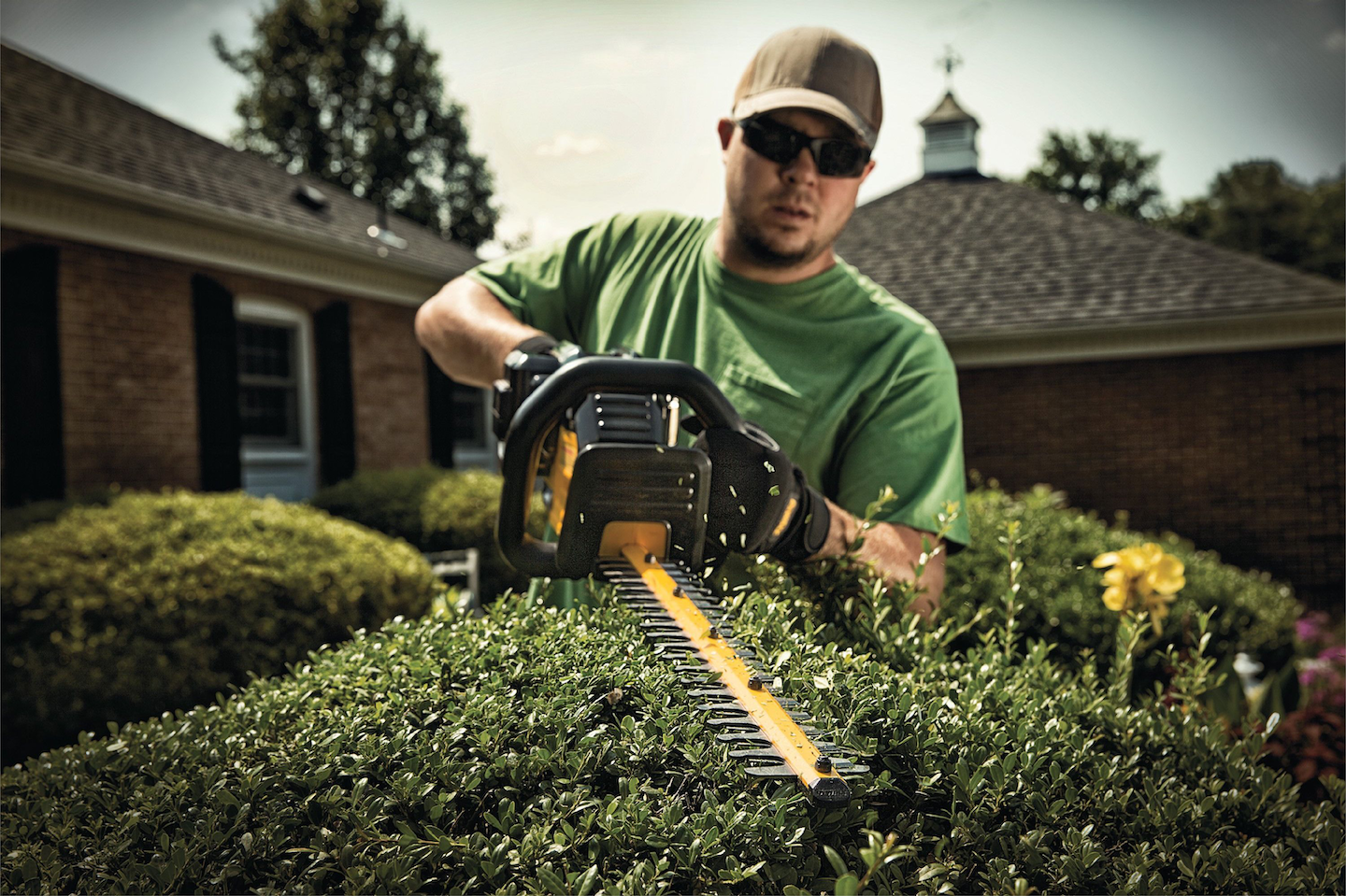 DeWalt’s 40V Max hedge trimmer is designed to handle branches up to 3/4 of an inch thick.
Photo: DeWalt

One of the common complaints landscapers have against battery-powered equipment is that it simply can’t match up to a gas-powered counterpart. Changing that perception is a slow process, but the steady advance in battery-powered tools’ performance in recent years has finally begun to chip away at the negative assumptions – even making believers out of some professional landscapers.

Greg Taylor, owner of GTM Services in Largo, Florida, was skeptical about battery-powered alternatives until he had a chance to test one of DeWalt’s tools at GIE+EXPO.

“It just opened my eyes to the sheer power,” Taylor said.

Taylor had been in the market for a hedge trimmer after having numerous carburetor issues with his tools, so he had bought the DeWalt 40V Max hedge trimmer in 2014. The following year, he met DeWalt product manager Tyler Delin at GIE+EXPO and Delin asked if he’d like to try out the rest of the manufacturer’s battery-powered equipment.

“I had nothing to lose so I put them in service,” Taylor said. “I’ve used them under adverse conditions and they have just totally amazed me with how they match gas one for one.”

Within a week of using the 40V Max brushless string trimmer, he took his gas trimmers out of service. They haven’t been used in a year.

“I couldn’t be happier,” Taylor said. “I like the balance, the durability. I’ve got caught in the rain many times and it kept getting it done. I look forward to any new equipment they come out with.” 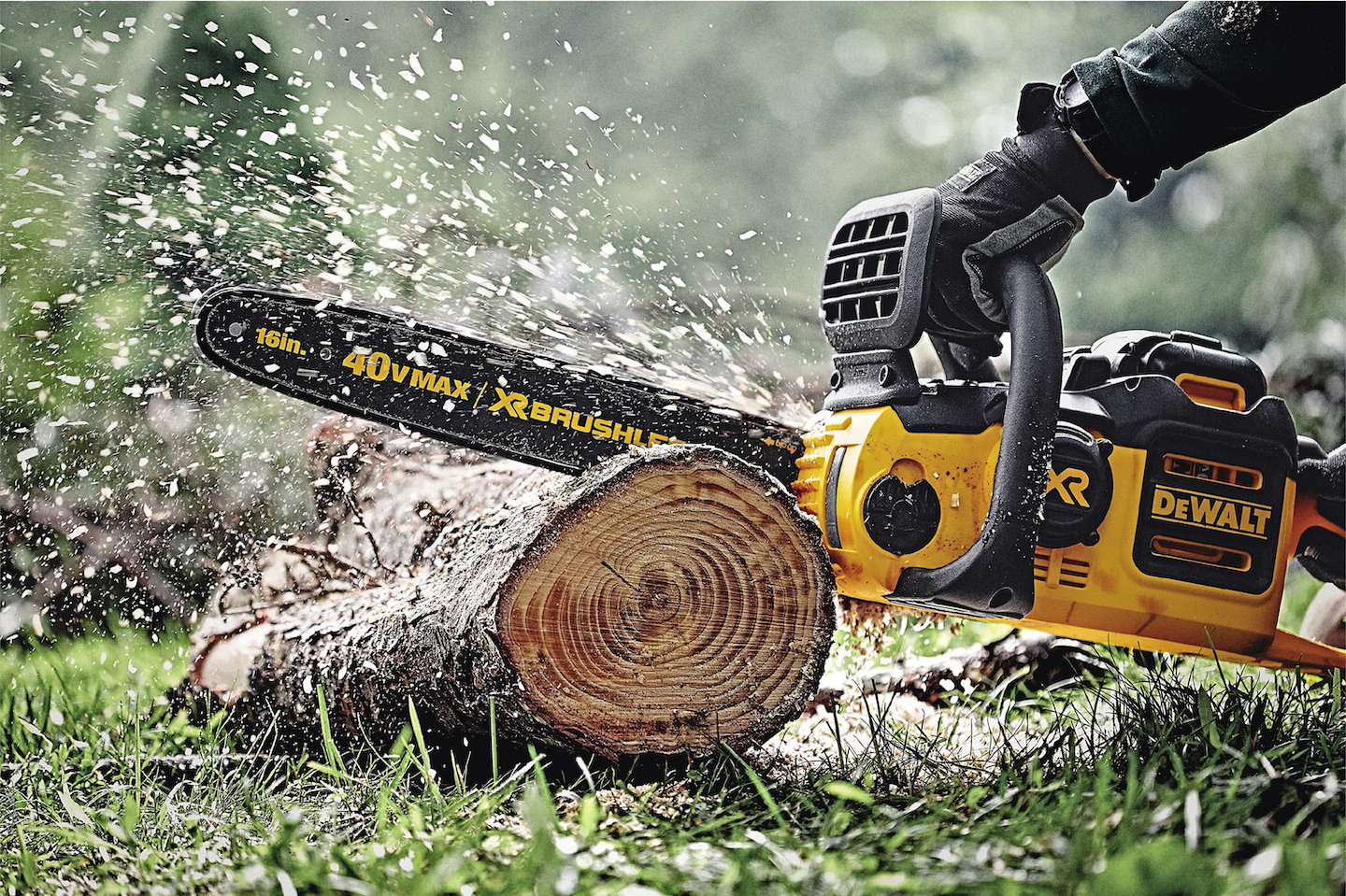 He discovered one of the perks of battery power is the absence of startup issues with equipment he doesn’t use every day, such as DeWalt’s 40V Max brushless chainsaw.

He also realized how much quieter the equipment was and the difference that made to the operator – not to mention bystanders – by the end of the day.

“People would come out of their house and say, ‘I didn’t even know you were out here,’” Taylor said. “You don’t realize how that noise gets to you until it’s gone. The noise adds up over time.”

“That’s not to say it’s not usable,” he said. “To me, it’s more balanced. The run time is great, 45 minutes to an hour. It works really well and is a much quieter unit, so it’s good for town homes and vacation cottages or when I’m working later in the afternoon.”

As for the battery packs themselves, Taylor keeps six battery packs with him for one day of work, generally going through four or five while visiting 20 lawns a day.

“I’ve never had an issue with running out of batteries, never been frustrated with or out of power,” he said. “It feels like a tank of gas. When I switched over (to a new battery), there was no more of a stop than you would normally take for gas, and switching the battery out is much quicker.”

According to DeWalt’s Delin, one of the main challenges for the manufacturer is getting the word out to landscapers about the actual run time of the equipment. While the run time for a piece of battery-powered equipment may be listed as 50 minutes at full throttle, the battery will actually last about two to three hours because the machine is not being run at full throttle non-stop.

“Lots of other lawn guys see it and are shocked,” Taylor said. “They ask me ‘How can you carry enough batteries with you?’ You think when you look at the run time that this thing is going to be done before you (finish), but it runs at variable speeds just like a gas-powered one.”

The main reason Taylor had switched was because of mechanical issues with his gas-powered tools, but he realized that aside from saving time with maintenance, he was also realizing considerable savings by lowering his fuel consumption.

“When you factor in what you’re saving, you’re actually ahead of the game,” he said. “It’s definitely less expensive with the overall operating costs figured in. The initial purchase seems like a lot, but that battery is replacing your fuel costs.”

Delin had encountered Brandenberg while he was out working and offered him the chance to test out the equipment and share his feedback. 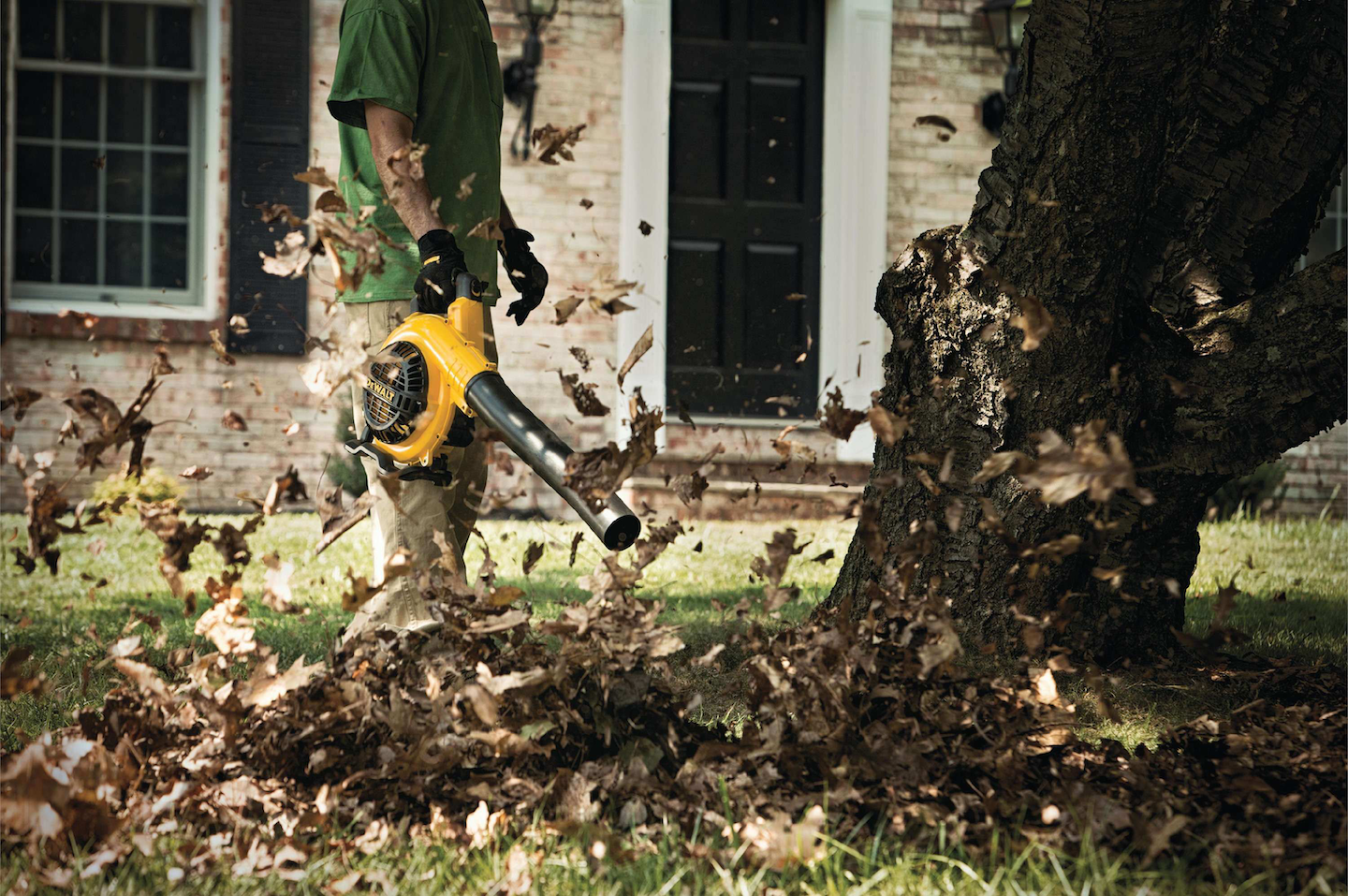 Taylor and Brandenberg both like using their DeWalt handheld blower for small jobs and clearing off their mowers.
Photo: DeWalt

“Initially, I switched away because it was a novel idea,” Brandenberg said. “I thought, well, let’s give it a try.”

He started using the string trimmer in May of last year. Within a few weeks, he stopped carrying his gas-powered version to the job sites.

Brandenberg also uses the chainsaw, backpack blower and the handheld blower, and like Taylor, he appreciates that he can let the tools sit for a month and not have to worry about whether they will be ready to go when he needs them again.

“I would think they’re (landscapers) going to be pleasantly surprised and see how well that it works,” Brandenberg said. “I’m sure most of them would be apprehensive as I was. I love the string trimmer.”