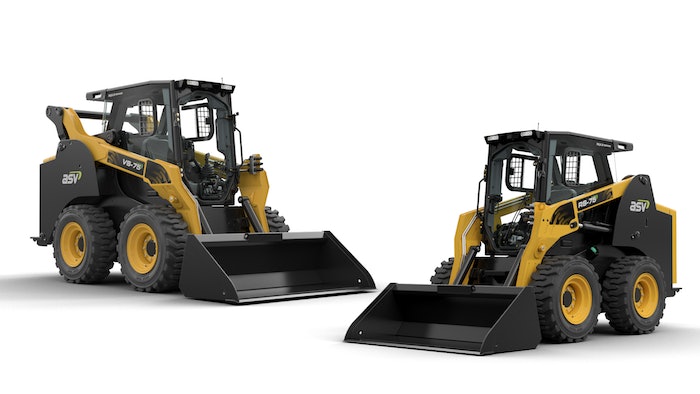 ASV has expanded its Max-Series to its vertical-lift VS-75 (left) and the radial-lift RS-75.
ASV

Did you like the Max-Series cab in ASV's compact track loader lineup? Now you can get the same cab on the company's skid steers, the vertical-lift VS-75 and the radial-lift RS-75.

"A big focus of the Max-Series was improving the operator experience," says Buck Storlie, ASV product line manager, in talking to Equipment World about the launch. "Anything we can do to keep the operator in the seat longer and more comfortably really helps him get more work done. We're excited to give operators the option to achieve that same level of premium experience in a skid steer."

Adding the Max-Series cab will also help ASV's skid steer stand out from a crowded competitive field, Storlie says. "You sit down and it's very much a wow factor," he says.

ASV calls the optional suspension seat "the most customizable in the industry." It features adjustable four-way controls and armrests, recline, slide and weight.

Another option is the pressurized cab, designed to help repel noise, dust and debris and provide a comfortable indoor operating temperature. The cab's updated HVAC system provides better circulation and defrosting capabilities. Upgrades include speaker and radio improvements, including an optional Bluetooth radio that allows you to both listen to calls and take calls wirelessly.

In addition to the visibility, CTL customers are talking about the Max-Series' intuitive placement of controls, display and safety features, Storlie says. The company expects much the same reaction from its skid steer customers.

"One of the most dangerous parts of operating a skid steer is getting in and out of a loader," Storlie says. ASV combatted this by lowering the entry step and adding more clearance and a larger door opening. A one-sided lap bar aids entry/exit.

Although the cab aligns with what is on the Max-Series CTLs, there are some differences.

"We use a unique frame design on our skid steers in order to get the right weight balance and lift capacities," Storlie says. "We had to make a bit more room for the loader towers since the Max-Series cab is 2 inches wider than our prior cab."

"When you sit down in the cab, we wanted it to be a complete picture," he adds. "We didn't want a hose or loader frame blocking that visibility."

But don't think creating the Max-Series for skid steer or CTLs was just a slap-on-a-new-cab process, Storlie says.

"We put a lot of emphasis on the overall product and reliability improvements, including new hose routings, wiring harnesses and fully sealed fuse panels," he says.

A dual-throttle option allows operators to set rpm with the joystick control and increase rpms with the foot pedal, both without needing to adjust the rpm dial.

The CTL version of the Max-Series has been a big hit for ASV, which says it boosted production capacity by 30% earlier this year to keep up with the demand for it and other products. "We've added about 30 employees already and still have some open positions," Storlie says.

Although skid steer sales have been outdistanced by CTLs in recent years, they still have broad appeal, selling about 30,000 units in North America per year, Storlie says. And while ASV cut its teeth on CTLs, the company has been offering skid steers since 2009.