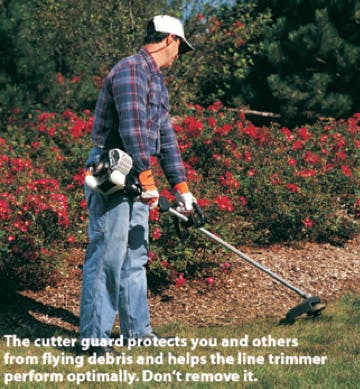 The accident: A landscaping company employee had taken the cutter guard off a line trimmer a few weeks earlier because it was getting hung up in the lower branches of some shrubbery. Finding the trimmer’s maneuverability improved, the worker left the guard off. Now he noticed a few blades of tall grass remaining next to the flower bed border and moved the cutting head closer to it. The whirling line picked up several pebbles that had spilled out of the planting bed and slung them toward the worker, who was wearing shorts. Three of the rocks embedded in the man’s legs.

What the expert says: You should never remove the cutter guard from a line trimmer, cautions Tim Ard, manager of field application training for Husqvarna. The primary function of the guard is to shield you and others in the area from flying debris. In addition to rocks, line trimmers can launch sticks, mulch, grass particles and pieces of glass found along walkway edges. At the least, getting hit by flying debris will sting, Ard says. At worst, thrown objects will lodge deep in your skin or hit you in the eye.

Many professionals take off the cutter guard because they think increased line length speeds productivity, says Gary Lalla, product manager for trimmers, Echo Outdoor Power Equipment. The guard limits line length to 8 inches on each side of the cutter head for a 16-inch cutting swath. Without the guard, a 24-inch swath is possible. “Not only is this dangerous, but it reduces the performance of the trimmer,” Lalla says.

Ard says another excuse people give for removing the guard is that it prevents them from seeing the cutting head. Most line trimmer manufacturers are designing their products so you can see around the guard, he says.

Even with the cutter guard attached, line trimmers are capable of throwing debris long distances with great force. Most manufacturers suggest people other than the operator stay at least 50 feet away from the work area. Be aware of the rotational direction of the cutting head and position yourself and the trimmer so debris will be projected away from people or property. Before using the line trimmer, pick up sticks, rocks and other loose debris.

Avoid working with the exhaust side close to your body as this can cause burns.

The man injured in the example accident was not wearing the proper protective gear, Ard says. “With line trimmers, long pants are highly recommended,” he says. Wearing tennis shoes is OK, Ard says, but you’ll probably be doing other things – mowing, for instance – that require steel toes.

You also should wear long sleeves, gloves and a face shield. Consider wearing gloves with vibration-reducing padding if the line trimmer you use doesn’t have an anti-vibration system.

Use the line trimmer’s shoulder harness or strap. They’re designed to take pressure off your back and arm. 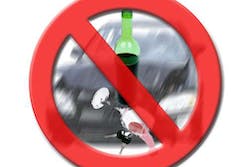 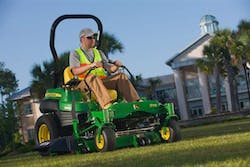 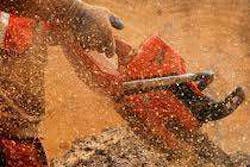 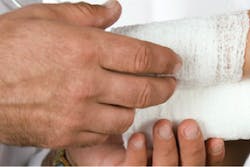