Ginkgo Leaf Studio, based in Cedarburg, Wisconsin, is a landscape design firm that prides itself on its ability to design landscapes that connect customers with nature and fit with the surrounding space.

Jim Drzewiecki, owner and principal of Ginkgo Leaf, credits his business’s success to his passionate focus on design and attention to detail.

An example of Drzewiecki’s attention to detail is when he and his landscape designer and horticulturalist Hannah Paulson, went through 200 samples of mortar to find the right color to ensure a hardscape wall matched the house built 10 years prior.

He also notes his architectural training impacts his designs considerably, especially his hardscape-related ones. He says often has a good feel of proper scale and proportion so a space will feel just right.

“I don’t have a horticulture background, but I’ve always looked at it as a positive thing,” Drzewiecki says. “I think I’m specifically an interesting hybrid as a person that I have plant knowledge, but I have this architectural construction-based background and I blend the two. I think that shows in our designs.”

He credits his architectural background as well for knowing how to pull the right details off of a house to include in a landscape design.

Drzewiecki says if they’re lucky enough to get a client with a house with strong architecture, these projects are where they truly shine. Often times when they’ve finished people can’t tell what parts were added by Ginkgo Leaf and what parts were done when the house was built. Drzewiecki says this can sometimes be a negative, as some might not realize how much of the landscape is his work, but he also considers it the best compliment

“My favorite thing is to make a landscape look like it belongs with that particular house,” Drzewiecki says.

Because Drzewiecki often looks to the design of the home for inspiration, he says if you look at Ginkgo Leaf’s portfolio you will see there is not just one style occurring.

If he had to start all over again, Drzewiecki says the best possible thing is to go work for someone else and learn from them.

“I’m completely self-taught, but a lot of the bulk of that self-taught (learning) is having worked for a major design/build company,” he says. “All the knowledge and insight and everything that I gained from that, I don’t think I would have been able to start a business from scratch without that.”

Some other general advice Drzewiecki offers to not take things personally when a client doesn’t like what you’ve drawn.

“You better get beyond that,” he says. “Because otherwise it’d be a miserable existence if you felt hurt every time someone didn’t like what you drew.”

As for where Ginkgo Leaf’s leads come from, there are the referrals from past clients, local residential architects, and neighbors who have seen their work, but the majority of the landscape design firm’s business comes from Houzz.

Drzewiecki says he was an early adopter of Houzz after hearing about it from to interior designers he worked with. At first, he thought it was a scam, as a website that allowed you to post your portfolio for free sounded too good to be true.

“We go out of our way; we spend a lot of time finding out all the right things to do with the Houzz profile,” Drzewiecki says. “If they say you should do this, we do it. We pay for professional photography. I think that’s partially why our portfolio is popular because it looks like we care about our projects and presenting our projects.”

Houzz has written about several of Ginkgo Leaf’s projects as well, which helps with the firm’s exposure.

“We focus more on the visual side of social media and Houzz is number one in that,” Drzewiecki says.

Drzewiecki says they pay for Pro Plus, which places the landscape design firm’s profile in searches when a local person is browsing the site. The company also has strong organic popularity, even in other countries.

“The issue is, it’s fine to be followed by someone in Italy or the Philippines or wherever, but that doesn’t translate to work,” Drzewiecki says. “That’s why you pay for the Pro Plus, is to guarantee that people in the Cedarburg, Mequon, Greater Milwaukee area see us. I mean, it’s great for the ego to know you have followers in other countries, but it doesn’t pay your bills.”

As for other forms of social media, Drzewiecki says he posts on Facebook on a semi-regular basis. He says he has used some architectural fan Facebook groups to find clients who are looking for a landscape designer who is fluent in styles like mid-century modern.

He says they plan to launch an official Instagram page when they get time to build it out.

Drzewiecki also invested in creating a solid website early on.

“I went all in on a pretty nice website as soon as I could because I knew that was important,” he says. “I think that’s where a lot of startup businesses fail is not having a web presence.”

Ginkgo Leaf’s location in historic Cedarburg as well can draw in potential customers from time to time. The landscape design firm shares the building with a skin care clinic and an accessory boutique, which are both downstairs. Drzewiecki says they have a sign and brochures at the base of the stairs. He says walk-ins have occurred in the past.

When it comes to the frequent issues Ginkgo Leaf has to overcome, Drzewiecki says his number one pain point is unreasonable expectations from customers. He says clients often have watched too much HGTV and assume landscapes can be installed in a weekend.

“That’s more of an annoyance than anything, but I think moving forward, we have to be better about setting clients expectation,” he says.

These expectations also have to be managed because Ginkgo Leaf is a design-only company, meaning they have higher design fees, unlike some design/build firms that may not charge for a landscape design or only charge a nominal fee.

“We can’t do any of that because this is what we’re selling,” Drzewiecki says. “I would charge if someone said I want a 3D image, or I want to see this in VR. Whereas a design/build company might just make it part of their package and that’s a challenge for us. But I think most clients understand that when we explain to them why.”

Just like anyone in the green industry, weather too can cause Ginkgo Leaf’s plans to awry and push things off schedule.

“We get some of the backlash from our clients, too,” Paulson says. “So even though we might not necessarily be the reason that things are taking longer than they had hoped, we get a lot of the complaints and the annoyance.”

A current challenge Ginkgo Leaf is dealing with is an extended backlog. This is a ripple effect caused by the weather and landscape contractors not having the labor they need to meet production demands. Drzewiecki says they are heading towards a six-month to year-long backlog. He says they are upfront with clients about this backlog, so they are aware from the start.

He says he has considered adding the install aspect to his business from time to time. Yet he says Paulson often talks him out of making this major investment.

“You would need a full team of people to do installation,” she says. “The labor is just not there. We know contractors who are having a hard time finding one person, let alone starting a crew from nothing.”

Instead, Drzewiecki says if this labor shortage becomes the new norm, they plan to establish a system with their go-to contractors where they are leaving room in their schedules for Ginkgo Leaf’s work.

He acknowledges that it’s a leap of faith on the contractor’s side, trusting Ginkgo Leaf to provide all their incoming work, but Drzewiecki doesn’t see things slowing down any time soon.

“I think definitely keeping a good, healthy mindset when it comes to running a business is the way to go,” Paulson says. “Just staying positive. It is stressful and there’s a lot of things you got to work around that can happen. It’s constantly changing, and the economy is constantly changing. There’s always going to be hurdles that you have to jump over.”

Despite the challenges and the stress, Drzewiecki says it would be hard for him to pinpoint something he doesn’t like about his job.

“I consider myself extremely lucky,” he says. “I am blessed that I get to do this for a living. Every morning, I thank God and say, ‘Thank you for letting me design with Your creation,’ because I can’t think of a better job instead of this.”

When it comes to Ginkgo Leaf’s plans to grow, Drzewiecki say he expects to buy the entire building they work in in the future.

He isn’t sure that he wants to hire more designers but does eventually see them hiring someone to do more of the CAD work. He says by hiring someone to take on the CAD drawing, Paulson would be free to design more and reduce some of their backlog of design work.

“I don’t know that I want more designers,” he says. “Because eventually I think I’d feel like I was just managing designers and I don’t want to do that. I want to design.”

Eventually, Drzewiecki would love to be known as the go-to landscape designer for mid-century modern homes.

Ginkgo Leaf is also considering branching out to several different geographical markets. The landscape design firm’s typical radius is an hour to an hour and half away, but they have done projects in Illinois and Arizona currently.

“As long as someone’s willing to pay us to travel, we’ll go nearly anywhere,” Drzewiecki says.

In 10 years, Drzewiecki expects they’ll have a broader client base in locations like Arizona, Montana, Florida and even Key West.

“Who knows, in 10 years we might we have our own crew?” Drzewiecki says. “It’s possible. Because it does give us some control we don’t have right now.”

Sometimes, Drzewiecki considers dropping the project supervision service in order to remove some stress, but both he and Paulson enjoy it overall and the fact that it allows them to be involved with the design’s implementation.

“I think being involved with the supervision has led us to actually develop real relationships with some of our clients,” he says. “We’ve been invited over to clients’ houses for parties. Sometimes clients drop in and give us a little gift. I don’t think that happens if we’re just like, ‘Here’s your design. See you later.’ Our Illinois client told us that we’ve changed his life with his landscape. We literally have changed his life and I don’t know that there’s a better reward for doing this job than that.” 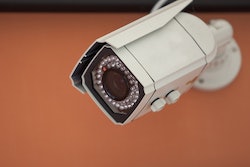 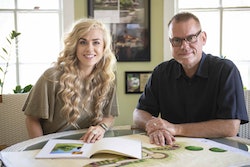 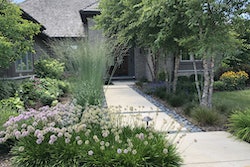 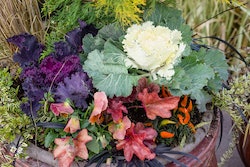