Rent a goat: How to incorporate goatscaping into your landscape operations

Yesterday, we covered what all goes into running a goat rental business, as well as the typical price range and customer base you can expect.

If you’re still curious about this service, here are some of its selling points, challenges and ways you can incorporate goatscaping into your operations.

While goats having an iron stomach and a love for eating tin cans is an exaggeration, they do indeed prefer eating a number of nuisance or invasive species such as kudzu, poison hemlock and Himalayan blackberry.

“It’s a nice coincidence that almost all of what we would consider invasive plants in North America can not only be consumed by goats, but turn out to be some of the goat favorites,” says Aaron Steele, founder of Goats On the Go, based in Ames, Iowa.

Because the goats are able to eat a number of noxious weeds, they eliminate the need for herbicides that might runoff into lakes or streams or machinery that would give off emissions. They can also access hard to reach places that aren’t safe for humans or machines.

Thanks to their brush clearing abilities, goats have even been credited to saving the Reagan Library from the 2019 wildfires in California.

“They grazed there before the fires hit so it didn’t burn down,” says Tammy Dunakin, owner of Rent-A-Ruminant, LLC based in Seattle, Washington.

One facet of goatscaping you might expect to be a problem but actually isn’t are the goat droppings.

“Goat manure is a lot like white-tailed deer manure or rabbit manure,” Steele says. “You almost don’t notice it on the ground. It’s not like cattle or some other livestock and it’s dry. So, it doesn’t cause nearly the mess that you might expect, and in most cases, it really is actually a benefit to the land.”

As an added bonus, goats also sterilize the weed seeds that pass through their system so there’s no need to worry about them repropagating the problem plants somewhere else on the property.

You might think that because the goats are the ones clearing the vegetation that goatscaping is a relaxing job, but it has its share of hard work.

Effectively installing the fencing on steep slopes in a jungle of vegetation and in ways that will keep these furry escape artists from causing a panic is a skill that is learned over time. Dunakin says that the fencing has a learning curve to it.

“The biggest pain points are the fencing – both customer fencing and electric – it takes a lot of troubleshooting to get it down to a science and to learn and predict your goats’ behavior,” says Megan Kibby, co-owner of Red Wagon Goats based in Decatur, Georgia. “You will get a lot of panicked ‘the goats are out!’ calls in the beginning, and it doesn’t matter whether you’re sleeping, or sick or at your best friend’s wedding – you go.”

Even though goats are voracious eating machines, it does not mean there aren’t any plants they can’t eat. Some of the plants they can’t safely eat include nandina, azaleas, mountain laurel and rhododendrons. It’s important to know what plants are toxic in your area and keep the goats away from them, as they do not know not to eat them.

“They’ll go straight to the most poisonous thing you can imagine and start eating on it,” Dunakin says. “They don’t like super bitter things, but other than that if it’s green, they will wolf it down.”

Another challenge is dealing with the goats’ medical care and upkeep. Dunakin says it can be tough to keep the goats’ parasite load down, as most have developed a resistance to the antibiotics.

“Goats require a tremendous amount of maintenance and medical care, as they are outside animals, susceptible to so many diseases and parasites,” Kibby says. “You’ll need to know how to recognize symptoms and have everything you need on hand to respond to emergencies because vets that are willing to treat goats are few and far between.”

Kibby says that even when you’ve given your all caring for the goats, you will still lose some of them. She says loss is a part of herd management and one of the worst parts of working in a business model where it relies on adorable living beings.

Customer perceptions are another issue you can expect to face, as some may balk at your pricing while local governments may view the goats as a hazard.

“People tend to think, ‘Oh goats, it’s cheap,’” Dunakin says. “If it’s a good, reputable company, it should not be cheap. It should be competitively priced but on par with other methods. That’s a hurdle we’ve all had to get over over time to get people to take it seriously.”

Breaking into new areas and building up clientele can take a little longer in areas that haven’t used goats before in the past.

Adding it as a service

As you can tell from the aforementioned challenges and business expenses, goatscaping is quite an involved practice and features a number of elements that might cause you to feel it is quite out of your depth. Several companies offer affiliate opportunities and Rent-A-Ruminant provides franchise openings that can help with providing the necessary training and knowledge that goes into this service.

“I think the two businesses complement each other really, really well,” Steele says. “And to be able to offer goat grazing in addition to more conventional services is a great opportunity to capture a whole new segment of customers and to do cross-promotion between your conventional services and the growth of the goat grazing. So, it’s a great opportunity but I encourage them to go into it with their eyes wide open and get some experience first with livestock and with managing goats before just diving in.”

If it still seems too involved for your operations but is something you want to take advantage of, there’s also the option of collaborating with or subcontracting current goatscaping companies.

“I would get in touch with goat rental companies who do this already and talk collaboration,” Kibby says. “So many of our customers are looking for follow-up landscaping work and there’s so much potential for symbiosis, even in terms of sharing labor. Goats are on jobs for days at a time so it’s hard to keep employees busy on a M-F 9-5 schedule. For a smaller landscaping company who has good employees that want to work and stay busy, sharing human resources with a goat rental company could be a great way to get employees the hours they seek, and have continuity for customers in terms of the pre-clearing and then landscaping. It’s also obviously mutually beneficial in terms of exposure and referrals.”

Goat grazing can serve as a stepping-stone in the landscaping process as it is not a one and done solution, but rather the land the goats clear needs to be maintained or planted over with native plants to keep the invasive vegetation out.

“There is a huge need for landscapers for the follow-up work,” Kibby says. “Our customers constantly ask us, but the goats keep us on our toes 24:7, so it’s hard to imagine taking any more on!”

Steele agrees that it’s actually common for their customers to hire them to take the landscape down to a manageable level before hiring a landscaper to do some follow-up work.

When it comes to selecting a reputable goat rental company to work with or subcontract, Dunakin suggests looking for a company that does not exploit its goats and has a healthy-looking herd.

“I would say talk to their other customers, get some background on them, check their ratings to make sure there isn’t a big history of complaints,” Dunakin says. “Make sure they’re doing good by the critters and then make sure that they live on site. They’ve got to live on-site to make sure nothing bad happens. That might be a goat getting hurt, that might be an escape, people trying to steal them, a lot of stuff can happen.”

For those worried that goatscaping is just fad that will fade in a few years, it’s only the novelty aspect of the service that will diminish as at the end of the day it is a practical service for certain situations.

In the future, Kibby expects it will move slightly away from residential customers and into more large, state-owned land to reduce the risk of wildfires, or to open up the land for other uses.

Steele says that the public’s aversion to herbicides, the need to control invasive species and the desire to manage the fuel load for wildfires are all driving forces that ensure goatscaping has carved out a niche for itself. 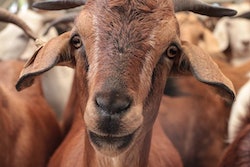 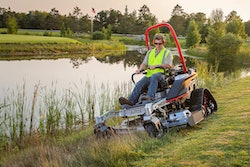 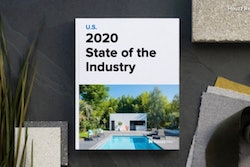