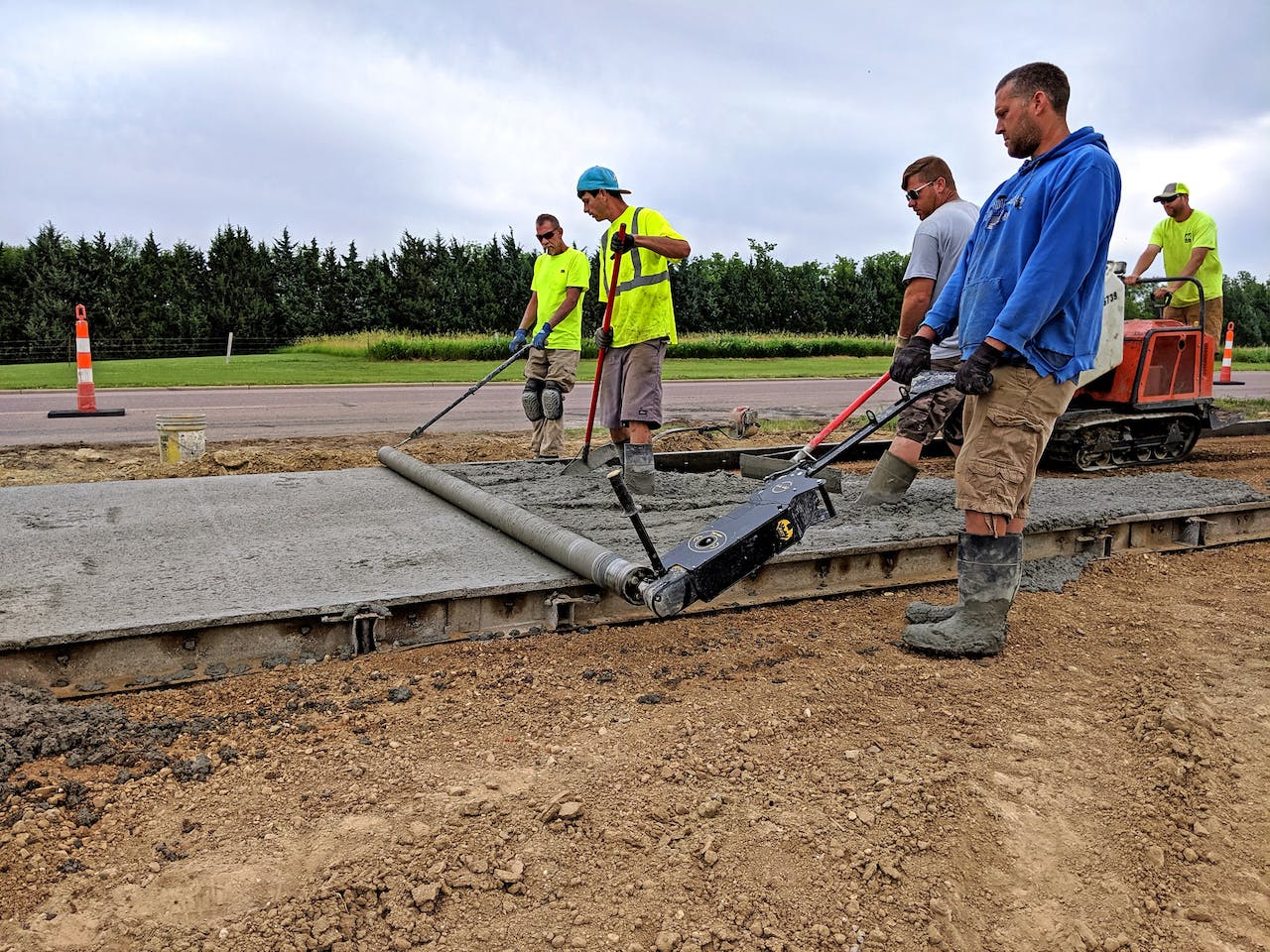 The company says the lightweight roller screed operates with no cords, hoses or fumes, offering unparalleled mobility, precision and efficiency to contractors of all sizes.

The company says the Batt Screed eliminates the hassle of working around a cord and the added weight of an engine mounted on the screed. The company says the unit gets its power from a removable and rechargeable 60-volt lithium-ion DeWalt Flexvolt battery.

The company says one fully charged battery is estimated to screed off 1,800-2,500 square feet, depending on the slump and pipe length. By eliminating an auxiliary power source, the company says the Batt Screed 6000 can be operated almost anywhere.

“Our Curb Roller team is continuously looking to lead the industry with products that make customers more profitable,” says Seth Ulmer, Curb Roller Manufacturing sales manager. “We don’t design ‘me too’ products. We provide the tools that contractors want, with the features that allow them to get more jobs done.”

The company says the Batt Screed provides a consistently higher-quality finished product than vibrating screeds or screed boards, and it eliminates the need for back-breaking work.

With a lightweight design and a folding handle, the company says the Batt Screed 6000 is easy to operate and transport. The company says the design includes an adjustable right- or left-hand speed control, variable speed in both high and low ranges and a three-position handle that allows for a more ergonomic operation.

The company says the Batt Screed’s kickstand and handle fold and lock away for compact and lightweight transport without removing the battery, and it features strong connection points that help prevent unnecessary wear or breakage.

The company says the single pin connection on both ends allows the operator to remove the pipe from the handles in less than 60 seconds, and the quick assembly and break down of the Batt Screed enhance productivity, enabling contractors to complete more projects each day.

“Time is money on any construction project,” says Ulmer. “The faster a contractor can complete the job and get on to the next jobsite, the more profitable they can be. The Batt Screed addresses that challenge and so much more.”

The company says the Batt Screed’s all-steel housing protects the motor and electrical components inside from moisture, concrete and accidental impact and an access door protects the battery from dirt and debris.

EGO says it has taken its game up a notch with the introduction of a two-stage battery-powered snowblower and an improved version of the single stage.

The company says it’s designed for people who want to move a lot of snow or who are plagued with snowplow piles at the end of the driveway. EGO says its 24-inch wide, thick gauge steel box, with its aggressive steel augurs and retractable drift cutters, chews through the frozen stuff and delivers it to the steel impeller that flings the snow up to 50 feet. 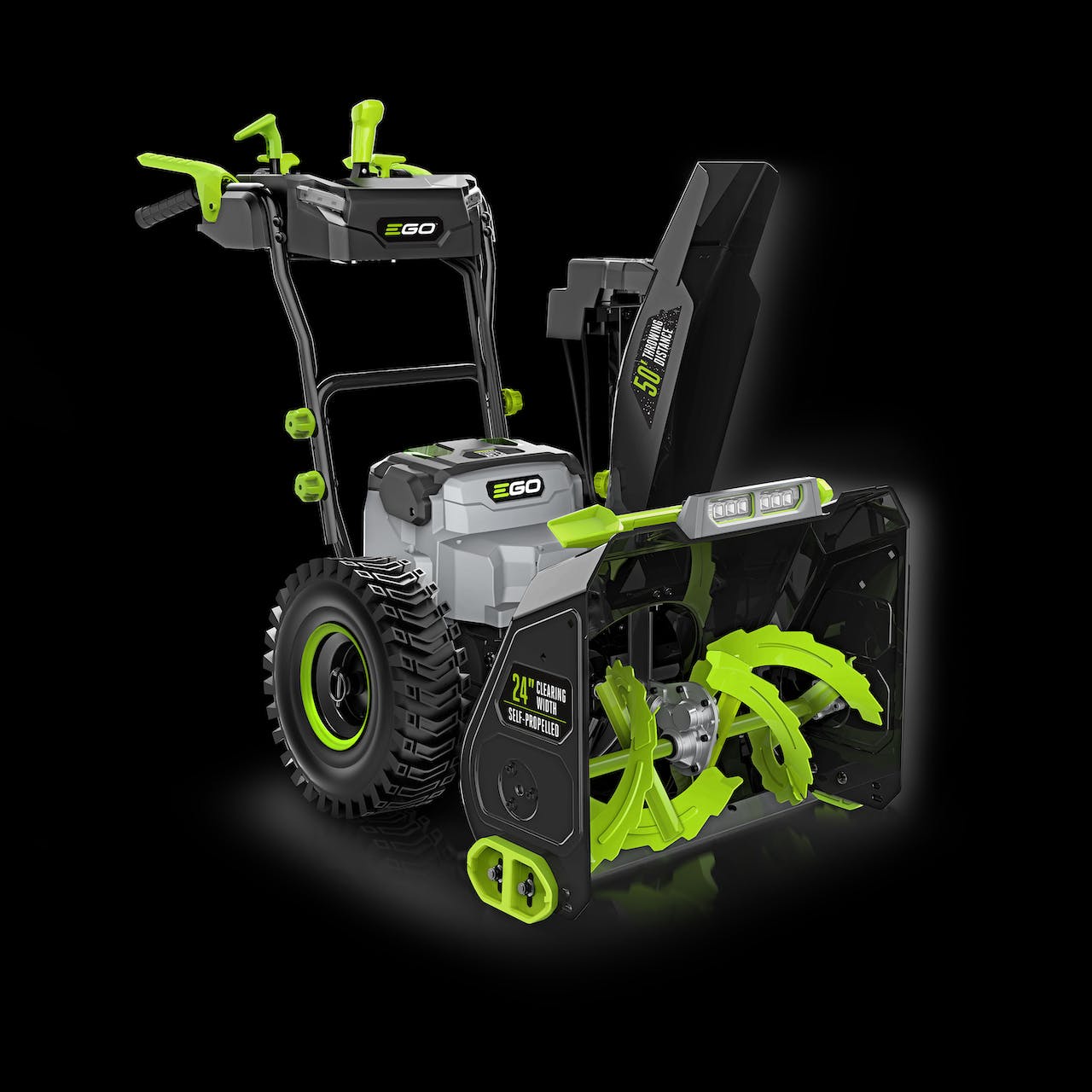 EGO says traction is assured on all manner of surfaces with aggressive 15”x 3.5” wheels and a limited-slip differential that allows the machine to make turns effortlessly.

EGO says it has also paid great attention to the user interface. The company says dexterity with big winter gloves is not a given, so all the controls are designed to be easy to use while delivering maximum efficiency.

To engage the drive, EGO says users squeeze the handle grips. Once in gear, the company says users can let go of either the left or the right handle which will then allow users to work the other controls with a free hand. In forward, EGO says users can adjust the speed from .9 -2 .7mph, and the reverse speed is .9 mph. Each increment is defined with a click of a detente.

EGO says directing the snow is achieved with a push of a joystick across a 200-degree arc, and users can put the snow exactly where they want it with another lever that raises or lowers the chute cowling. The company says a bank of LED headlights, high and low on the machine, allows users to see what they’re doing no matter the conditions or time of day.

With two 7.5 ah ARC lithium batteries, EGO says users can easily clear an eight-car driveway with 14” of medium density snow. The company says it’s also available with two 10ah batteries that will give 25 percent more run time. Included in the kit is the duo charger that charges two batteries.

EGO says instead of hard rubber paddles that fling the snow up and out of the chute 35 feet, the new blower, model #SNT2110, has steel augurs that aggressively chew through the snow and end of driveway crud to send the snow flying up to 40 feet. The company adds that it will clear a 17-car driveway of up to 8” of medium density snow on a single charge.

The company says these models in the 4- to 5-metric-ton size class serve customers in various industries, and the excavators’ compact size and mobility make them valuable for commercial and residential developments and landscape projects. In addition, Doosan says the machines’ versatility makes them ideal for utility companies that perform underground construction tasks.

The company says a new dual-flange track roller system works in tandem with an enhanced counterweight for better over-the-side digging and lifting capabilities, and an integrated lift eye allows for easier craning and lifting.

Doosan says operators now have the option to remove the bucket when lifting to maximize capacity with the new secure lifting point, and the DX42-5K and DX50-5K excavators have a 3-cylinder Doosan diesel engine that is more fuel-efficient. 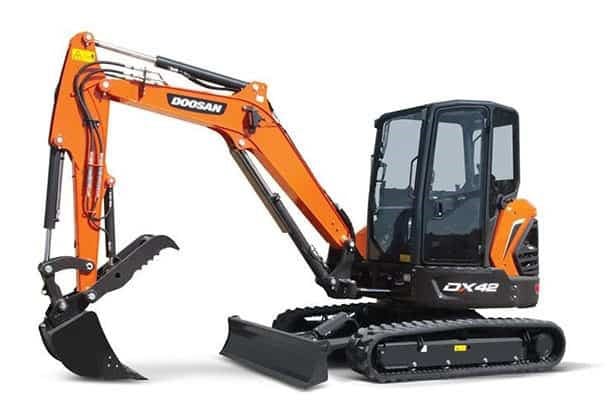 The company says a total of six tie-downs provide extra security during transport, and for an additional dig depth and reach, a long-arm option is available for the DX42-5K and DX50-5K.

Doosan says easy-to-reach auxiliary hydraulic couplers are now located on the mini excavator’s arm, and the repositioned couplers help reduce the time needed for operators to connect the hydraulic hoses.

The company says operators can monitor and troubleshoot with additional easily available data on the 5-inch display panel, and these models are available with an optional integrated rearview camera for enhanced all-around visibility.

The company says the DX42-5K and DX50-5K mini excavators are designed with modifications to improve machine durability. Doosan says it offers six models in its mini excavator lineup that complement the company’s larger crawler excavator models, offering a full line of excavating equipment. 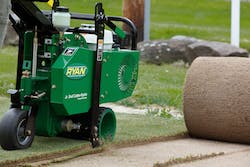 Sod cutting tips to keep you on the right track 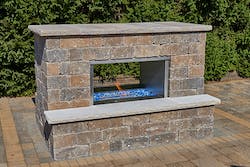 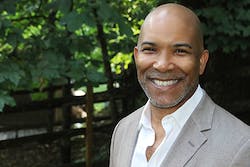 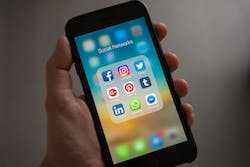 How to: Boosting your landscaping business brand with social media