The tornado hit around 4:15 p.m., and according to Pella police Lt. Shane Cox, there were “several injuries” as the result of the storm. Vince Newendorp, speaking for Vermeer, said the east side of Vermeer’s manufacturing facility sustained the most damage.

“We certainly are going to rebuild and we’re going to come back stronger than ever,” said Vermeer CEO Jason Andringa, after pausing to fight back tears during a news conference.

You can see the tornado passing over the Vermeer campus in this video.

Around 8 p.m. Thursday night, Pella Regional Health Center released a statement saying the hospital received seven patients from the Vermeer facility, each with minor injuries. All were released.

“We appreciate everyone’s thoughts and prayers with all that happened today,” the statement reads. “We are beyond proud of the response of our staff. Staff was still here because of the tornado warning and mobilized immediately upon hearing of the Vermeer situation.”

The affected plants were along the “Vermeer mile,” where several manufacturing facilities are lined up in a row. The company employs around 2,700 people in Pella. Complicating matters further, Andringa said that when the storm hit, the campus was hosting more than 400 dealers and customers.

“From the Vermeer family perspective and from our executive team’s perspective, we are most pleased that all injuries were relatively minor injuries and all of those that went to the hospital for treatment have already been released,” Andringa said. “That’s the single thing that we’re most happy about. We had 400 dealers and customers here to celebrate our 70th anniversary. We’ve dealt with lots of challenges in seven decades of doing business. This is a new major one. As we have survived and thrived after every challenge we’ve had thus far, we plan to do so again.”

“Upon being notified of severe weather, we worked to quickly activate our emergency response system. The emergency alarms in all buildings sounded and team members, dealers and customers were directed to tornado shelters in all facilities on the Vermeer campus,” Andringa said.

Vermeer’s Facebook post at approximately 6 p.m. on Thursday said in part, “There has been major damage to multiple facilities. Our efforts, along with emergency services, are focused on ensuring those on our property during the event are safe and cared for.”

Andringa said the campus suffered “significant” damage to both its structures and to the personal property on campus at the time. The waste management facility is “a complete loss,” Andringa said. Meanwhile plants 5 and 6 both suffered enough damage that the company believes operations will cease in those buildings for the time being. “Plant 4, 7 and our advanced system testing facility will need a structural assessment before we can determine the impact of the damage and the ability to continue operations,” Andringa added.

The extent of the damage can be seen in this YouTube video shot by Monte Goodyk using a drone. A separate video, posted to Facebook and embedded below this post, shows the damage from the ground.

For the time being, Vermeer is asking team members, dealers, customers and community members to refrain from visiting the campus. The company also suspended third shift operations for Thursday night and all operations for Friday.

Andringa said that the company will bring in a small team of people to the campus to “determine what we can do immediately with the idea of at least having some production going again on Monday, and then really assessing what steps we’re going to have to take to get the rest of our production up and going again.”

Talking to the Pella Chronicle, Vermeer employee Paul Davidson said employees had about 20 minutes of warning and some were getting restless in company shelters before the air pressure dropped and the storm hit.

EDITOR’S NOTE: Marcia Gruver Doyle is the editorial director of the Construction Division of Randall-Reilly, and Wayne Grayson is the online managing editor of Equipment World, another Randall-Reilly publication. 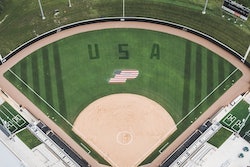 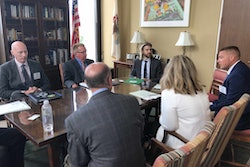 Landscapers advocate for H-2B during Legislative Days on the Hill 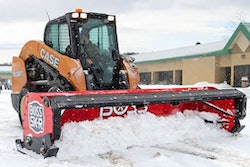 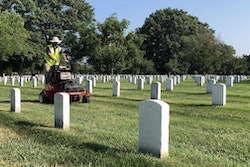